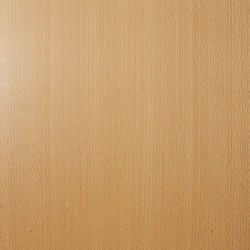 Beech is typically a pale cream color, sometimes with a pink or brown hue. Veneer tends to be slightly darker colored, as slicing the veneer usually requires the wood to be prepared with steam, which gives the wood a more golden tone. Flatsawn surfaces tend to be very plain, while quartersawn surfaces exhibit a silvery fleck pattern. Beech has a fine to medium texture, with closed pores and an even grain structure. Beech can also exhibit a moderate amount of natural luster/sheen.

Uses- Overall, Beech has a good workability, and compares fairly closely to Hard Maple in many aspects. It machines well, and glues, finishes, and turns well. Beech also responds superbly to steam-bending. It does, however, have a large amount of movement in service, as evidenced by its large shrinkage numbers, so movement and wood stability must be taken into account for projects involving Beech.